Story told by son, Dr. O.E. Kahan, a retired Seattle dentist who visited Devils Lake in 1958 and was able to locate his family’s recorded farm deed. 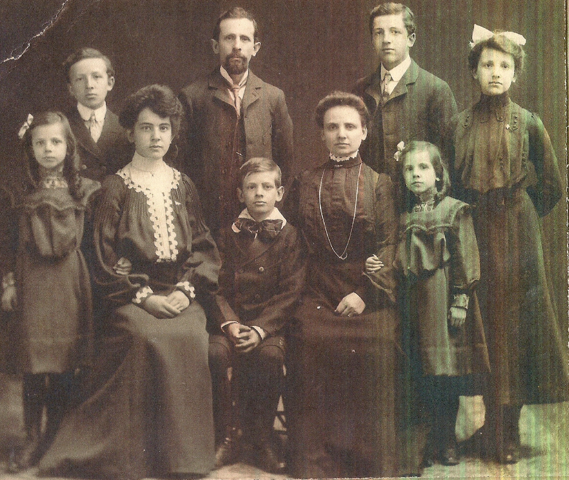 Immigrant Louis Kahan Living in Poland, Mr. and Mrs. Louis Kahan were attracted to the opportunities to own land in the United States. Louis came to this country and worked on the railroad as a section hand as the railroad moved west. When he had saved enough money to bring his wife to this country, he boarded the train for St. Paul and was robbed by the conductor and brakeman on the train who threw him from the moving train after removing his shoes. Landing in a snow bank, he was not seriously injured and after discovering one of his shoes, made his way to a farm house where he recovered from frost bite. Kahan was tempted to return to Poland, but his wife wrote him a letter saying she would borrow money from an uncle and join him in America. In a more recently discovered interview of their daughter, Sarah Siegel, additional information stated that he returned to St. Paul where he and another man repaired and rented houses to save and earn enough money to bring his family to the U.S. With Annie’s arrival in St. Paul, in 1886 the couple joined a colony of Jewish immigrants and moved to the area east of Garske (becoming one of the 104 original members of Garske Colony homesteaders). Louis was very devout and referred to as Reb Lazer, possibly led the prayers of the Colony homesteaders. After weathering crop failures, fires, and winter hardship, the colony finally had a bumper crop of grain and hay. One day while Mr. Kahan was after a load of wood with an ox drawn wagon, thieves came to the farm and hauled away most of the grain despite the attempts of Mrs. Kahan to drive them away with a pitchfork. So great was their despair that they signed over their land and in 1891 left for Seattle where they made their future home.

We now have learned:
Louis Kahn formerly Kahan was born about 1859 in Poland/Russia. He was the brother of Malkie (Kahn) Kolodkin and Sura (Kahan) Ganopole. He married Annie (Kahan) Kahn about 1882 in Russia. Annie was born about 1863 in Russia. They were once removed cousins. Louis immigrated to the United States from Poland to St. Paul, Minnesota in about 1882 and was to send for his wife and children to immigrate after he had earned enough money to pay for their passage.

Louis and Annie became the parents of 9 children. The first two were born in Russia. Their son died before Annie immigrated to the U.S. With her young daughter, Molly (Kahan) Karman, and an uncle whose name may have been Jacob Kaplan she arrived about 1884.