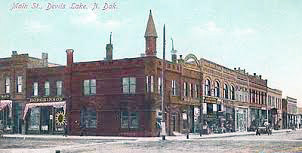 Devils Lake was settled in 1882 and was the second homestead colony. Eventually 104 Jewish men and women filed in Ramsey County for land in this area. The original colonists also had help in the establishment of this community from the Baron de Hirsch Fund. This was the community in which my great grandfather Davis Rubin, either by chance or design settled and homesteaded. He arrived in 1893 ten years after the initial settlement.

In September of 1889, seven years after the colony was established, a committee from the Twin Cities was formed to visit the Jewish Colony near Devils Lake to examine their conditions. They returned with the intent of raising money to help the farmers who had remained. At this point Devils Lake became part of the social welfare program of the Minneapolis Jewry. The Dakota Relief Committee was formed. The St. Paul and Manitoba Railroad transported the supplies free. The shipment was large enough for their needs and consisted of 1300 pounds of flour, barrels of beans and rice, four cases of clothing and wood for heating. Whereas the St. Paul community had supported the Painted Woods community, Minneapolis Jewry took on the support of the Devils Lake community, although support came from all over the country, Jewish and non-alike. (San Francisco Jews were most generous.) Still the colony suffered and many colonists began to leave. A few settlers held out and in 1892 were joined by others, including my great grandfather. The colony persisted and eventually became a success.

Farmer Philip Greenberg reported on behalf of the colonists in 1901:
We had a very good crop this year and all of the Jewish farmers were greatly benefited by the threshing machine, which the Jewish Agricultural and Industrial Society of New York placed here. All of the farmers threshed in good season. This is the first time that the crop of the Jewish farmers has been threshed before November since they have been here. (North Dakota History, Jewish Colonies at Painted Woods and Devils Lake)
From a report of the Jewish Agricultural And Industrial Aid Society: The following amount of threshing was done with the outfit during the season just passed for 18 Jewish farmers in said section, to wit:

Devils Lake had a full community life. High Holiday services were held in the courthouse and court dates were not set in the fall of the year until High Holiday dates were scheduled first. Despite privations, most of the settlers adhered to Orthodox Jewish ritual. Rabbi Papermaster had come from Lithuania in 1883 and settled in Fargo before moving to Grand Forks in 1891. He was the first rabbi in North Dakota. Each fall he visited Devils Lake to prepare kosher meat and fowl for the winter. He returned when he was needed for a wedding or a bris (circumcision ceremony for newborn baby boys). 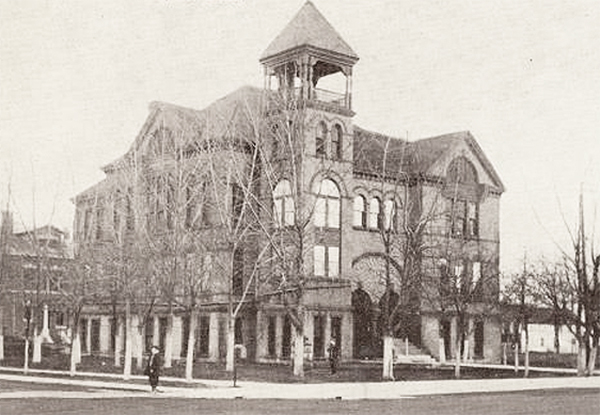 Often when the colonists left the farm settlements, they became peddlers, storekeepers or railroad construction workers. Old timers among the former Jewish colonists recalled that non-Jewish farmers often put up peddlers for the night and served them fried eggs for breakfast as a courtesy because they knew the peddlers would not eat pork. One or two Jewish women in the towns opened boarding houses catering to Jewish bachelors as a way of finding husbands for their daughters.

An article in the North Dakota State Historical Society paints a picture of life there:


A mile west and one mile south of the Jewish cemetery (which is now abandoned) was the United States post office known as Ben Zion. It was a solitary building, which also served as the living quarters of Bennie Greenberg, the postman. Mail delivery was once a week brought by a team of horse from Devils Lake. When the Farmers Grain and Shipping Company Railroad was built to Garske in 1902 the post office of Ben Zion was closed. Garske was only five miles southwest of Ben Zion and offered daily train service and delivery of the mail.

There was never a Jewish community located in the Ben Zion vicinity, although Jewish families occupied land every quarter of a mile in the area. The nearest thing resembling an area village was a settlement four miles east of the Jewish cemetery where four members of the Calof family lived and had build houses at the corner of their land where the four pieces of property came together. Just north of their farms was located the area school house. The four Calofs were Moses Kolov, Charlie Kalaov, Abraham Calof and Jahn Calof. The Herman Kauffmans near whose property the cemetery developed were the parents of Lottie Kaufman, who was married in 1887 to Adolph Zukor, who later became the multi millionaire motion picture tycoon of Paramount Pictures. Davis and Bessie Rubin’s homesteads were also nearby.

In 1902 a dark cloud descended upon the Jewish settlers when it was discovered that the government land on which the Jewish cemetery was located had been advertised for sale and actually sold. A group of 30 Jewish residents subscribed to amounts sufficient to purchase five acres of land to hold and continue the existing cemetery. Dianne Ziskin Siegel’s great grandfather, Davis Rubin, was among the contributors. The last person buried there was Mendel Mill in 1935. Davis Rubin is not buried in this cemetery, but is buried in Grand Forks, North Dakota along with his wife, Bessie. The may have chosen Grand Forks because there was a synagogue there.

The settlement of Devils Lake was still in existence in 1912 and at that time was the Northwest’s oldest Jewish farm settlement. By the mid-twenties, however, many of the families had drifted away.