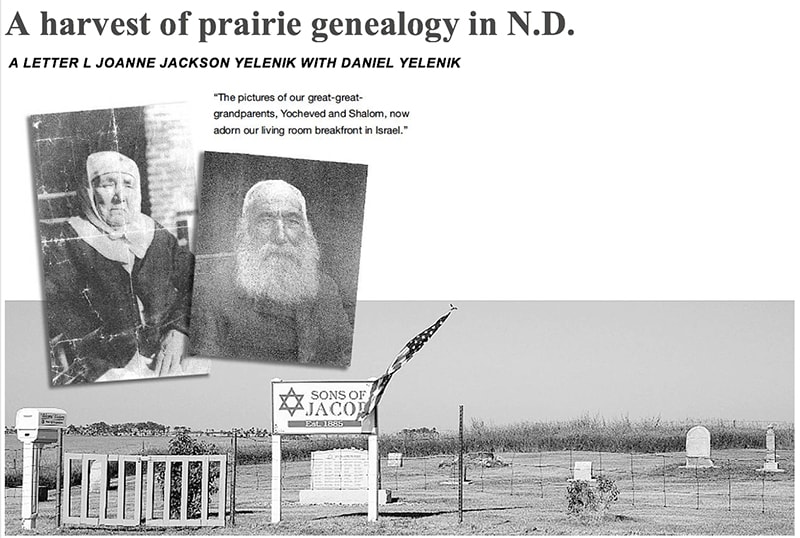 “The pictures of our great­greatgrandparents, Yocheved and Shalom, now adorn our living room breakfront in Israel.”

BET SHEMESH, Israel — I live in Israel. My son lives in the same community as Ido, along with his wife and children. Four generations of us, including my elderly mother, moved to Israel seven years ago out ofa desire to join in building a safe and thriving Jewish state on our ancient land.

Nothing is coincidental. In Israel, more than anywhere, one feels the presence of a larger plan.

How was it that because of what we found out, we were able to establish a connection with Mike Connor, a resident of Starkweather, N.D., and become aware that we owe him and his family a tremendous debt of gratitude — and that between our family, the Calofs, and Mike and his family, there isa bond that has lasted and will last through the generations?

About a year ago my granddaughter, Tzvia Naomi, entered the library of her high school and selected Etka Gitel Schwartz’s book, “Full Harvest.” Schwartz’s book is a novel that tells the story of Jewish settlement in North Dakota from around the 1880s through the early 1900s. The book is a ﬁctional history ofa Jewish family of pioneers who came to the area as a result of the land grants that were offered by the U.S. government.

At the end of the book, Schwartz provides extensive information and documentation on some historical settler families, one of which is the Calofs— our family. She also discusses another book, “Rachel Calof’s Story,” amemoir by Rachel Calof about her own family, including her mother-in-law, Charadh Calof.

My son and I, with the help and support of another Calof relative, Stan Calof of St. Paul, started to unravel the threads which established that my mother’s mother, Dora, and her sister, Zelda, immigrated to Devils Lake from the Ukraine along with her grandparents, Yocheved and Shalom Calof.

The detective work of my son led to his moment of epiphany when he realized that Rachel’s mother-in-law, Charadh, was one and the same person as his own greatgreat-great grandmother, Yocheved.

This information led to our planning a trip to Devils Lake.

Thus, it happened that on a beautiful sunny clear day, following Connor’s excellent directions, we drove the roads and paths toward the gravesite of Shalom Calof and some 15 other Jewish settlers.

Connor’s emails to me were such that it was as if he were carrying us to North Dakota in his arms. “No,” he wrote, “you do not have to do anything in advance. The cemetery is in our care, and you will ﬁnd the gravestones and the land very well cared for.”

And he was right. Imagine our surprise and pleasure when, in the midst of the rolling ﬁelds and plains of the paths we traveled, we came upon this wonderful sign, with a beautiful Star of David etched upon it, reading “Sons of Jacob Cemetery.”

Who would believe that perhaps one of the most carefully tended and honored Jewish cemetery sites in the world can be found on this untraveled road?

We stood under the vast, embracing North Dakota sky and felt at home.

How many people, Jewish and non-Jewish, know about this moment in history when people of different beliefs and backgrounds lived as neighbors and cared for one another because they shared dangerous and desperate living conditions?

They realized their survival hung on a thread. They lived in shanty homes; freezing cold and threatening storms could wipe out crops in moments; medical emergencies with no doctor at hand needed to be handled by common sense and prayer.

As David Calof,a grandson of Rachel Calof, said, “Jewish and non-Jewish alike, they lived in a world of trauma; they respected each other for the hard work and courage demonstrated by each one; they became a community on that basis.”

Most important, they helped each other through hard times marked by ﬁnancial, personal, work or family worries.
Standing by one another became emblematic of their feelings and their history.

Thus, the connection between the Connor family and the Calof family is inviolate. It is bonded on mutual affection, respect and a shared history marking us as children of North Dakota pioneers.

At the cemetery, there is a mailbox placed upon a beautiful fence to protect the graves from animals. In the mailbox, my cousin, Phil Goodman, and my son and myself, found a guest book to sign as well as a lovely photograph book called “Obsessed with North
Dakota” given to us by Shirley LeFleur, a board member of the Devils Lake Historical Society and someone who kindly reached out to us.

Yes, we have become obsessed with North Dakota, where the land is rich in human harvest and grows citizens who are as sturdy and as wholesome as the state’s famed produce.

The pictures of our greatgreat-grandparents, Yocheved and Shalom, now adorn our living room breakfront in Israel. We hope that we will be a credit to their memories as they enrich us by the example of their lives, their faith and their fortitude.